A Relaxed Friday: Concert and Movement 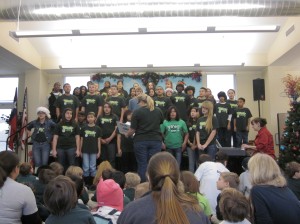 A local student choir of 7th and 8th grade students performed a 35 minutes holiday program for our elementary students today.  Singing familiar and new holiday carols, our students enjoyed the music, swaying to the beat or singing along.  This was a great peer example of how students behave on stage, watch their conductor, and sing with other students.  There were many sections of their choir and our students saw female groups, male groups, and a combined group singing different songs.  The Parish students were well-behaved in listening and clapping when the song was done.  After “I Want A Hippopotamus For Christmas,” students said they really like the song and laughed appropriately at the image of having a hippo as a present.  After the song “Fruitcake,” students were repeatedly saying, “fruitcake?” imitating the song and they said they like the song.

The theme of Creative Movement with Bears and Elephants today was focus and relaxation.  After “ice skating” with our two plates, the students played “Musical Plates.”  We put on our “Magic Shoes” that can do any movement (dance, jump, hop, walk backwards, tip toe, etc) and moved to the rhythmic beat.  They ran, walk backwards, and were overall giggling at chasing each other.  When the music stopped, they quickly looked for a plate to stand on.  I even scattered a few extra plates to ensure they found a plate somewhere near them.
Our last activity today was to lay on the floor, listen to the music, and relax.  The students became calm and were more centered after four minutes of breathing.  They have learned to say “Cockadoodle doo” as a wake up call.  So several students were “cockadooling” to other students who got up when they heard the call.  This activity was great for them to have time to themselves and let their bodies relax from all the structured activities and constant teacher interactions. 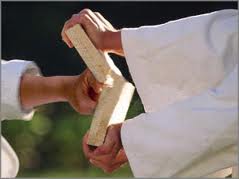 “Can you break a board?  When can we break boards?”  The Heros are fascinated that I can break boards and I promised that we will have a chance to break boards together sometime in March or April.  No worries, something lightweight that will not injury anyone!   Two students take lessons elsewhere and were great leaders in demonstrating to their classmates.  The highlight of today’s class was our breathing and meditation time at the beginning and end of our session.  The energy and anxiety level dropped and calmness was felt throughout the room.  Students were all thinking the same thought and each were able to focus on standing on one leg for 30 seconds each!  Their first Martial Arts class today, the Heros learned quickly and were excited to show off their punches, kicks, blocks, kiai’s, and bow to their classmates. After learning Thriller together, they have bonded as a class and even encourage each other as each student did a solo.  Knowing their movement abilities, I am excited about the possibilities of choreography for our elementary musical in the spring!